Decades ago when Steven Spielberg released his movie AI (Artificial Intelligence), little did he know that this word would cleave through the walls of his fantasy world and enter the real world to assume a rock-solid position. Stuff in the movies apart, what exactly is Artificial Intelligence, and how it’s going to make a difference to our daily routine. Dig into the information presented exclusively for you just in case you are introduced to this term but not its concept & merits.

The ability of any machine to think, analyze and act independently is popularly defined as Artificial Intelligence. In short, it’s nothing but making machines intelligent. What exactly happens when machines are intelligent? It’s not a rhetoric question anymore as we have a shining example of SOPHIA, a humanoid robot created by Hanson Robotics. Many must have already witnessed the smartness of Sophia, who apparently can think independently and has an answer to any question under the sky at bullet speed.  Awestruck by its performance, Saudi Arabia has granted citizenship.

Broadly classified into two types—Narrow AI and General AI—the former deals with the basic concept of AI, which is used to perform only a single task whereas the latter is the true artificial intelligence that can handle the tasks like that of a human. Studies indicated that AI is still in the budding stages where software such as Apple’s SIRI and self-driven cars fall within the concept of narrow or weak AI.

Apparently, 59% of companies are procuring critical information to chalk out their AI strategies while the remaining have already progressed, according to Gartner’s survey on Artificial Intelligence. 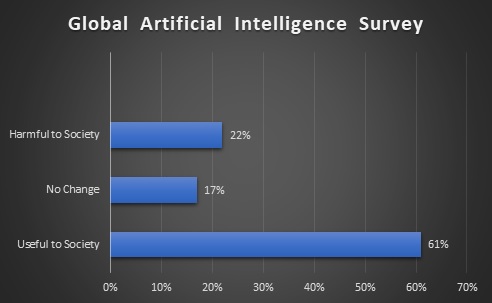 Medical: The immediate benefit of AI would be the medical field. Studies indicated that robots are going to take over manual surgical procedures. A humanoid robot or a machine is more likely to perform accurate surgeries compared to humans. Telemedicine is yet another area where AI would dominate, which will enable patients to receive immediate medical attention.

Military Operations: AI can transform the military functioning. Humanoid robots can be deployed in the war field, who can be as disastrous as possible to the intruders. Also, it avoids unnecessary casualties. A machine can easily be repaired and further used and is 100 times tougher than a human in terms of confronting dangerous artillery. However, the current international laws don’t permit the use of artificial lethal weapons, which require no manual intervention once they are activated. After 65 nations expressing interest in the use of AI in the military, Group of Government of Experts (GGE) was formed that mandates certain rules to be adhered to by nations before they use AI for defense.

Traffic Control: Artificial Intelligence is set to mark its name in traffic control in the Delhi state of India becoming the first ever government introducing AI techniques for efficient traffic control. These techniques include the detection of several pedestrians, four-wheelers, two-wheeler, and use a neural network to decrease traffic congestions. Earlier, a similar pilot project was created by Surtrac company in Pittsburgh. It was a grand success as traveling time was dipped by 25%. Alibaba, a noted company, too introduced traffic management solutions based on AI in Kuala Lumpur last year.

Transportation: Self-driven cars are now the reality with even cab services such as Uber pressing them into the service to cut the workforce and provide hassle-free driving experience. Self-driven/ autonomous cars require no manual driver. They are capable to sense the roads, traffic, and obstacles and head towards the destination without any manual intervention. It just requires the individual to set the destination place. BMW is currently operating a shuttle between Trieste and Munich in the UK.

Conclusion: Artificial Intelligence currently has its limitations especially certain laws prevent the complete use of AI in the fields of military and transportation. The UK recently launched a self-driving study, which will investigate the aspects such as civic responsibility and criminal scenarios. Although it might seem tough to dominate transportation, weak AI continues to make life sophisticated. Some estimates show that nearly 40 percent of businesses may be using AI to automate their processes by as early as next year. The day is not certainly far where general AI enters everyone’s home in the form of humanoid robots.